Mortgage Rates on the rise. 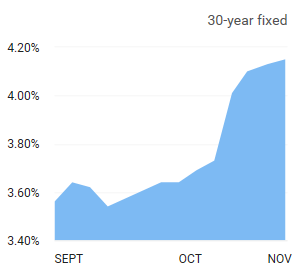 The Current National Mortgage Rate for Wednesday, Dec 8, 2016 on a 30 year fixed is 4.15% Mortgage rates rise again, ahead of the Fed decision
By Holden Lewis • Bankrate.com

Mortgage rates went up for the ninth time in 10 weeks. The good news is that they aren't rising as fast as they were a few weeks ago. The Federal Reserve's monetary policy committee is scheduled to meet next week, and mortgage rates usually don't move much in the week preceding a Fed meeting. The Fed is expected to raise a short-term interest rate by a quarter of a percentage point. Economists and mortgage bankers say that the increase already has been "baked into" mortgage rates.

"My opinion is that the rates moved up quickly in response to a (Donald) Trump presidency because the focus is on growth," says A.W. Pickel III, president of the Midwest division of AmCap Mortgage Ltd. This is the consensus opinion among economists and bankers: That the Republican-led Congress will be more free-spending with a Republican in the White House. Presumably, the deficit spending would stimulate the economy and cause interest rates to rise.